The Grote Kerk or Johannes de Doperkerk is a three-aisled cross church on Wageningen’s market square. The first church on this site was built in Romanesque style after Wageningen was granted city rights in 1263. In the 15th century, the church was expanded with a north aisle in Gothic style. In the 16th century, the rest of the church was also renovated in this style. In 1798 Napoleon assigned by law the ownership of almost all church towers to the civil congregation, also in Wageningen. In 1810 the church came into the possession of the Reformed Municipality of Wageningen. However, the tower remained in the possession of the civil municipality. In 1861-1862, the church was restored under the direction of the architect LH Eberson, adding four, later strongly criticized, gables to the tower. The church was heavily damaged twice during the Second World War. 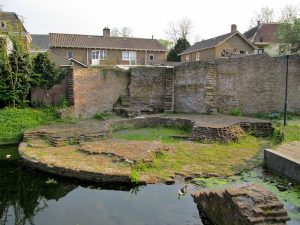 Wageningen obtained its city rights in 1263. It was granted by Otto II of Count of Guelders. For the Counts and Dukes of Guelders, in addition to being a trading port, Wageningen was important as a stronghold against the Bishopric of Utrecht. In 1526–27, Charles von Egmond, the last Duke of Guelders, gave permission for the building of a fortified castle in Wageningen. At the location is the remains of this castle.

The location of Wageningen was important for the duchy of Guelder. It was next to the river Rijn and close to the Bishopric of Utrecht. Therefore, Karel van Gelre decided to build a castle on this strategic place. The castle was built around 1500. The castle was later demolished by the French troops in 1672. After that the castle had no military meaning anymore. \n  The castle was sold to the Torck family. The park in which these ruins are found is also renamed after this family (Torckpark). Lubbert Adolf Torck was mayor of Wageningen. He rebuilt the castle and ordered the construction of several other buildings in the city of Wageningen. \n  In 1829 the castle was sold to Marcus Rosenik. He demolished a large part of the castle and built a villa on the place of the former castle. The villa was called ‘Villa Vada’. Now the Museum ‘De Casteelse Poort’ is located there. 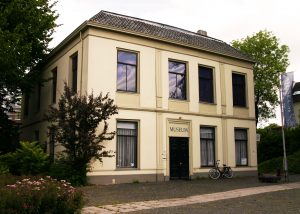 In 1500, Karel van Gelre bought a site in Wageningen and built a castle with garrison buildings on it. In the French era, 1794-1813, the castle served the troops as barracks. After their departure, the building was bought in 1830 by the large landowner Jacob Rosenik. He demolished all buildings except the living quarters. He left that alone to convert it into a stately villa.

At the end of the 19th century, this villa with the castle grounds was bought by Johannes Bowles, who had made a fortune as a planter in India. He renovated the building, which he called Villa Vada, and parceled out the land for the construction of 26 large mansions. These now together form the Bowlespark. After the municipality of Wageningen purchased the villa in the 20th century and housed the police station in it for some time, the building became available in 1986 for the then newly established Museum De Casteelse 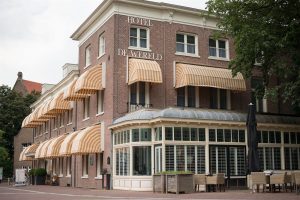 Every year on 4 and 5 May, the city of Wageningen commemorates the WWII and celebrates freedom. Highlights are the famous parade and the freedom festival with stage setups throughout the city center. The story of the capitulation has been reenacted. Watch what happened on 5 May 1945 in Hotel De Wereld (QR code at the back). Walk around the negations’ table and relive the moment in a virtual tour!